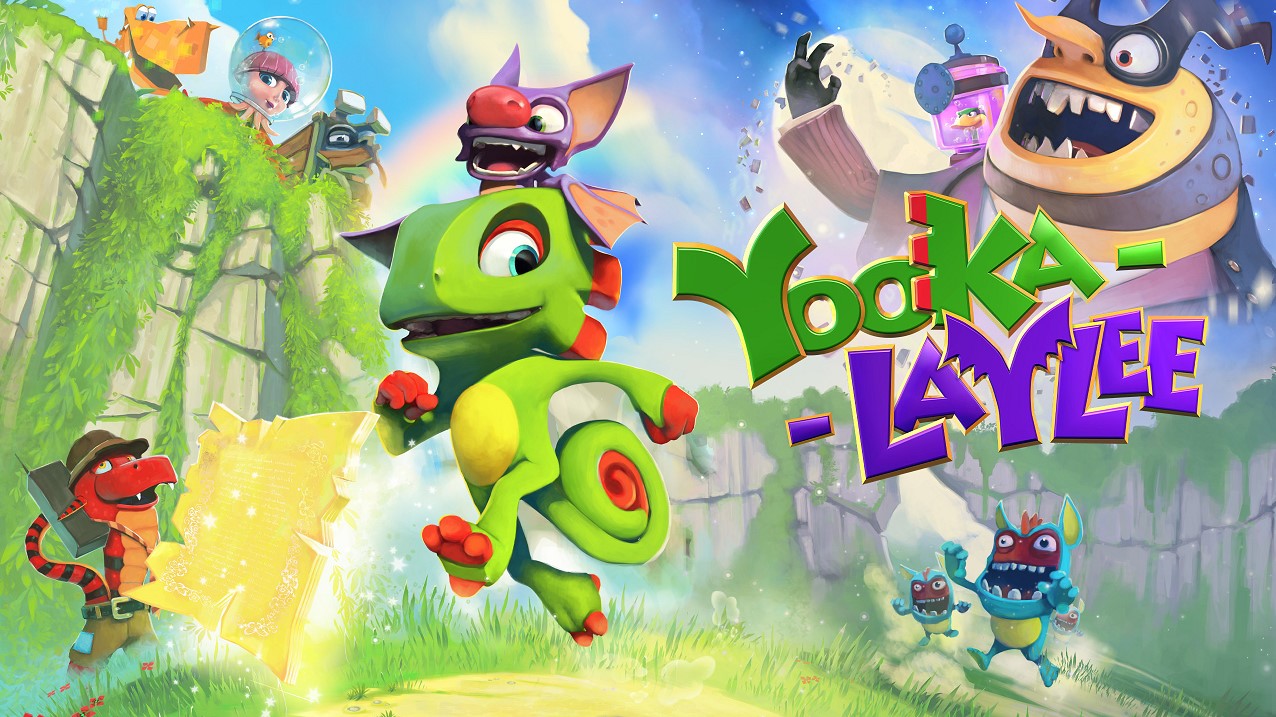 Yooka Laylee: We are living in interesting times. Just think: a few years ago, hundreds or even thousands of creators vegetated in poverty due to the banal impossibility of being heard. How many musicians, writers, and filmmakers gave up because of the lack of banknotes? But today, with the crowdfunding system already familiar to us, this does not seem to be a serious obstacle for creative individuals. Clearly tell your potential audience what you want and how much you need, and you can safely uncover your suitcase engraved with “inspiration” … or a dusty box with nostalgic notes from the past.

When you come across another project of such a plan, you want to ask a logical question: “Are you tired of it?” The community is constantly talking about an abnormal number of sequels, remakes, “heirs” and plagiarists. And it happens in all areas of the entertainment industry. There is also a good side here – people got the opportunity to play things like Torment: Tides of Numenera, which few people dare to publish or find out the ending of the Shenmue and The Longest Journey stories, which began under King Pea … However, in parallel, money is being collected for something like “a game inspired by the Mega Man series”. And don’t care what the quality of the last ninety-nine games of the franchise were. And then they are still surprised: “Why is Mighty No. 9 is so shitty?..”

It makes no sense to talk about how the development of the industry is influenced by the tastes of the audience itself. Someone prefers to brush their teeth with a fork, someone likes to paint ducks green, so if you want to play the same game twenty years in a row, no one has the right to stop you. That’s just if a genre has long died, you know: he died for a reason. And there is no need to complain that you were deceived. This introduction is here just to give you an idea of ​​where games like Yooka-Laylee come from today.

As is often the case, Playtonic Games employees spun off from the more famous studio – Rare. In its thirty-five years of existence, it has produced a wide variety of games, many of which have significant cultural value. Battletoads, Donkey Kong Country, Killer Instinct – for these and other things we have to thank the guys from Rare. Naturally, this nostalgic background played into the hands of Playtonic Games, which positioned its debut work as the spiritual heir to another once-popular Rare series – Banjo-Kazooie.

Here it should be recalled what Banjo-Kazooie is.Yooka Laylee

Remember that huge amount of 3D platformers where you had to rush around open locations and collect all kinds of things? Pieces that were used to buy new moves, which opened access to previously inaccessible places, where you could collect more pieces, buy even more moves, open … Remember? Amazing. Over the years, this whole “treasure voyage” was successfully assimilated into much more diverse “sandboxes” and this subspecies of adventure games rested in peace. However, Banjo-Kazooie itself has become a thing, if not a cult, then causing a touching nostalgic squeak from an experienced player. Worth two million pounds.

In fact, in the previous paragraph, the gameplay formula of Yooka-Laylee has already been described in great detail. Contrary to the obvious thoughts about small ukuleles, the name of the game consists of the names of the main characters: the young chameleon Yooka and his faithful girlfriend, the bat Laylee. Because all successful platform adventure games are usually titled with the names of the central protagonists! Well, there, Ratchet & Clank. Jack and Daxter. Banjo-Kazooie…

One fine day, Yooka and Laylee were peacefully resting on a pebble and not blowing their mustaches. But the evil dictator Capital B. (looks suspiciously like Gru from Despicable Me) is planning to steal ALL THE BOOKS IN THE WORLD! This villainy is not due to a manic craving for knowledge, but to find the only tome with which the asshole could literally rewrite the universe. Needless to say, the book hid in the bins of our couple? Probably, because these fools would not even have guessed from which side it opens … The treacherous encroachment on their useless property forced Yooka and Laylee to go in search of the pages of the mystical volume, which prudently scattered across different worlds. By the way, the names of the heroes and the names of the objects in this review are written in English, not because the author is a fool, but because so that you can feel the quality of domestic localization. Don’t thank.

There are five worlds in the game. They are hidden in tomes, carefully hidden on the basis of Capital B. Of course, as you master new techniques, the path to previously inaccessible areas of the sites will open for you. There you will collect even more currency, the role of which went to feathers (the tricks are bought for them), improvements for health and energy, as well as the desired pages – Pagies. The leaflets are held hostage by all sorts of swindlers who, without shame or conscience, force them to complete tasks of varying degrees of psychopathicness. It could be casual platforming, racing, mining cart rides (hello Donkey Kong Country) or even a quiz with questions like “How many tiles are there on the floor in this room?” Correct answer: 3535. Pagies themselves not only open books with new worlds, but also expand the old ones,

However, if you have interacted with video games up to this point, the latter may be a problem. The setting of literally all the worlds here is somehow sleep… inspired by other projects. Of course, the studio is not limited to Banjo-Kazooie alone, carefully absorbing ideas from the aforementioned Donkey Kong Country, Super Mario 64 and all sorts of Sonic. And if you still find jungles, ancient ruins, gloomy castles, ice levels, casinos and other hackneyed nonsense to be interesting objects for research, then you can only envy. In fairness, it should be noted that many of them are quite massive and stuffed with entertainment for every taste. If you don’t die of boredom in the first third of the game, Yooka will learn a lot of gastronomic tricks. So, eaten berries affect launched volleys: fiery, water, ice and even explosive.

It gets boring as quickly as it starts to entertain. The search for garbage turns into a routine, good platforming is spoiled by a degenerate camera, and the tonics offered by the game (perks that open according to the principle of achievements) have little effect on the process. But Playtonic Games is successfully coping with its nostalgic mission. The additional mini-games evoke vivid flashbacks to the times when you couldn’t get through another delayed side quest that jammed a required item to complete. After all, we all miss this, don’t we?

And all this would not be a big deal if Yooka-Laylee knew how to immerse the player in himself. This is how many 3D platformers of the past years have held up: due to unusual universes, fairy tale stories, sparkling dialogues and charming characters. So, all of the above is not about Yooka-Laylee at all. The leading couple is so dull that even the third snowdrift on the right at the ice level has more charisma than both of them put together. Yooka is a calm, sensible lizard who does all the rough work. Laylee is a bitchy, sarcastic mouse who has been given a couple of extra tricks that play a role in solving rare puzzles, whose share in the total abundance is fifteen percent at most. Oh yeah, it also justifies the ability to hover in this game. The rest of the time, Laylee plays the role of a mediocre comedian-relief, from whose jokes his eyes climb on his forehead.

Local humor is a separate article. Like the Rare team, Playtonic Games employees are from England. Accordingly, “sparkling” puns and real fart jokes are constantly spewed from the lips of Laylee. The last straw is a depressive cloud that accompanies the fall of its precipitation with comments in the spirit: “Finally, I am relieved!”, “How long I kept it in myself!” and grunting, usually published by people during defecation. And I don’t even want to think about how exactly the authors recorded the voice acting of this process. Best of all, scriptwriters, of course, manage to refer to old (and not so) games, the industry, crowdfunding and other things designed to roll the fourth wall into asphalt. But do they still understand that references should be proud of only when it’s impossible to be proud of humor?

Yooka-Laylee is very reminiscent of a man who broke into a hipster party in the image of Jimi Hendrix. What would be great if he knew how to handle the guitar at least at the level of an amateur. However, nothing good comes out of this venture. The game not only does not revive the dead genre of old-school 3D platformers, but also reminds of why many gamers might not like it. And he does it shamelessly hiding behind the skin of a good Banjo-Kazooie series. The only good news is that critics and some of her Kickstarter sponsors are well aware of this – reviews of Yooka-Laylee are very, very restrained.

But at the same time, it cannot be denied that the game is well executed on a technical level. It looks nice, platform jumps are comfortable (when the camera isn’t involved, of course), and the controls are quite friendly. And it is possible that Yooka-Laylee will appeal to the younger members of your family. However, keep in mind that after meeting her, there is a high probability that the child will develop an extremely bad sense of humor.

Kona
The Walking Dead – A New Frontier: Episode 3 – Above the Law
To Top