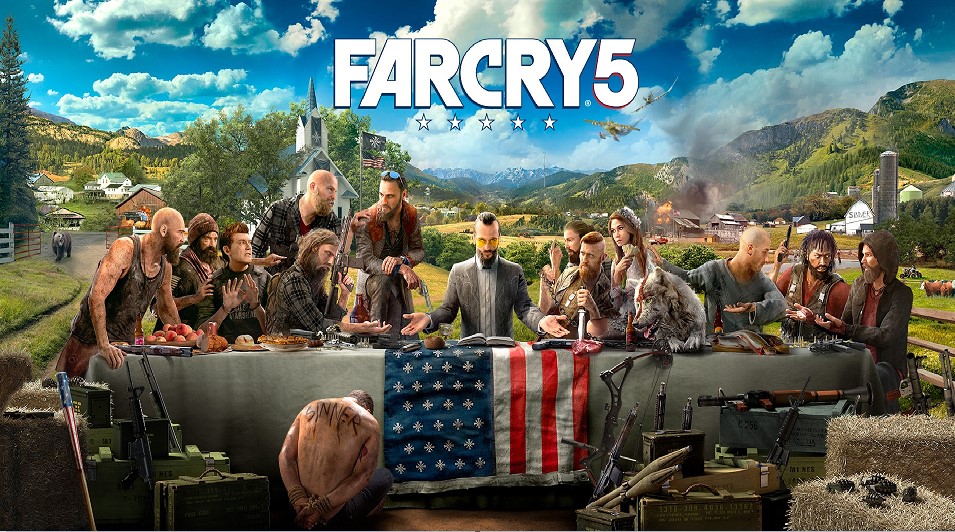 Rejoice, children, for His kingdom has come and His light has descended on us with the logo in the form of a poop! And He told us that distant cries are good and that the more often they appear, the more joy will be in our hearts. But the last year was darkened, because there were no distant cries in it, as if the devil himself stole a piece of program code from Him and pressed Delete. We waited – and were rewarded with the coming of spring, just as the temperature began to awaken nature to life and our wallets to inflame with purchases! (By the way, we put our cash in our donation basket, Martha will bring it to you) Let’s rejoice and praise His deeds!

And then He came, and He brought us again a distant cry, and seven angels in heaven stood at attention, and the sea of ​​​​thieves calmed down, and somewhere the Greek theomachist became depressed, and on the lands of the incessant battle, hundreds of unknowns lowered their weapons for the first time. Everyone fell silent to see His new revelation. And He knew what his children like to look at – not slowing down views, endless expanses, and the sons of Adam with very large guns, for He once said: “I did not bring peace to you, but a grenade launcher and a couple of Molotov cocktails.”

And there were no flaws in His creation, for it was made in the image and likeness of all His other distant cries, and the changes occurred only due to evolution (recognized by few). The spaces of his offspring are wide, nature is beautiful, the water is clear as glass, and the enemy is merciless and angry, which only strengthens our belief that such garbage must be eliminated, like Sodom and Gomorrah. And you can also call your friends from these Internets to help, but if there are none, then strangers from the local city, are controlled by artificial intelligence. There are three of all the creatures: three animals, three people, and, well, three women, not harlots, but nasty in their tongue. You can take any two of them with you for deeds you like, but you should first find your comrades and help them, for it is said in the scripture: “Help your neighbors and complete their personal quest,

And we rejoiced and fought with His name on our lips, and He rejoiced with us and offered to issue a pre-order for a seasonal subscription to His church. (By the way, hasn’t Martha brought you a donation basket yet?) But somewhere in the midst of outward impeccability lurked not original, but acquired problems. After all, the machinations of the devil can destroy any perfection, and when you create a creation of such a scale, then this cannot be avoided. And then something happened that none of us expected. We have seen that not everything He does is good. And His voice became weak and trembled. And instead of crazy laughter and joy, instead of the light that He was supposed to shed on us, we saw only gray working days, where we are forced to do routine. From what we love in distant cries, only a shadow remains, and all the good things He collected only in one of the three regions of His world, remotely similar to the region of the North American continent. We ate the flesh, but did not feel the taste, we drank the wine, but no matter how beautiful the drink was, only bitterness remained on the tongue.

The ending is tragic. The moral of the story match him – not the one who obeys reason is right, but the one who blindly bows and distorts the meaning of Holy Scripture for his own good. The moral is that those who oppose chaos and violence are evil. Terrible morality. Was this really His intention? Is this what He wanted to tell us? Of course, who are we to judge and discuss His words, but they are not like his past speeches. He told us, and we carried his wisdom: “Revenge for dad, mom, girlfriend, uncle, niece, daughter, president of Georgia, mammoth, rabbits, country, freedom, a bottle of rum is good. But to believe in schizophrenics is somehow not very good. And now what? Was it all a lie? Who, if not Him, the lord of the sands of time and creativity of Tom Clancy, now to believe?

The truth is somewhere else, or maybe just in a different form than we, mere mortals, are not supposed to comprehend. When looking at all this, an old parable comes to mind: once two friends were walking through the forest and had a big fight because one of them did not take food, but took a few kilograms more climbing equipment. In the middle of the day, when the silence between the quarreling friends was already painful, they discovered a decrepit tower four or even five stories high. Friends, without saying a word, decided to climb it, using the equipment, and climbed up for the rest of the day. This path brought them so much pleasure that on the roof they again turned out to be the best friends in the world, hugging and forgiving each other for everything. But then one of them said: “The towers in Zelda are better than this one,” and the second pushed him down from the roof.

So we don’t need to figure out why and why something has been done, not done, or done somehow wrong in a new distant cry. Something unimportant can turn out to be a deep metaphor, and something awkward can be a reference. Or it may be just what it is. The main thing is to understand how you yourself, children, feel about this kind of creation. If everything about them suits you, you can safely give Him all your money (leaving something for our donation basket). If not, then it is not entirely clear that you have forgotten Brothers Guillemot in our Adventist church at all. Maybe you should look for another parish? They say that in the abbey named after St. Mario will soon be banned from South Africa, so there will be room for them. You can go there and you will be happy too. And happiness is the most important thing.

Batman: The Enemy Within
Final Fantasy XIII
To Top