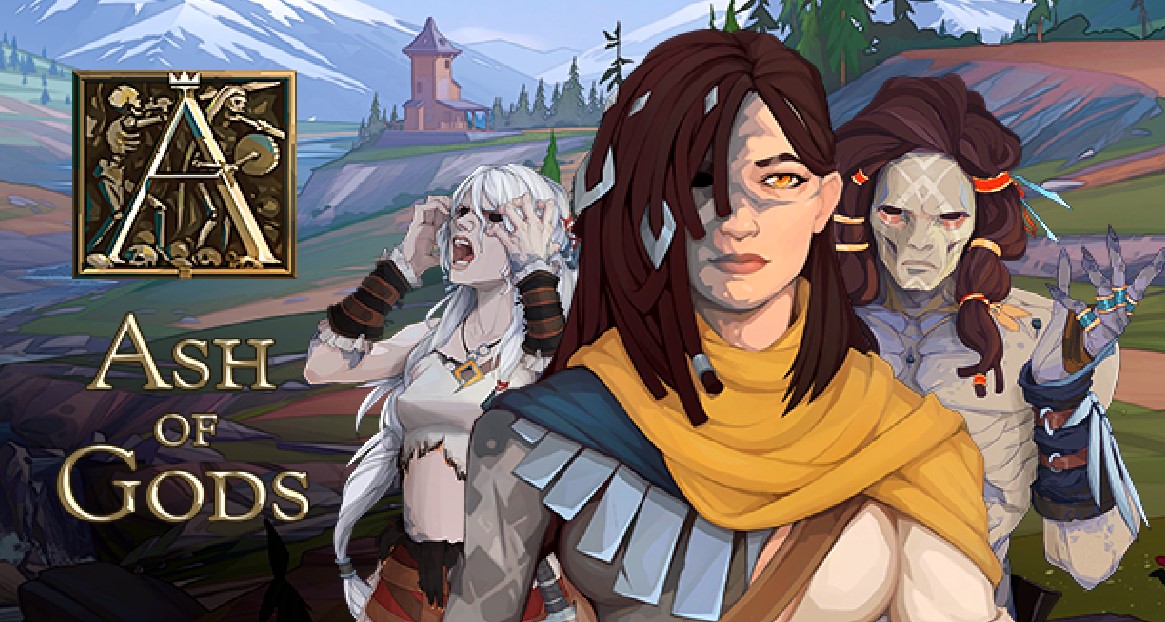 Ash of the Gods

Song of Stones and Harvest

Inspiration is an extremely important thing. It allows you not only to get out of your comfort zone and create something new for yourself and others, but also to learn something about the creativity of other people. Sometimes it is other people’s works that prompt writers to take up the pen, and artists to take up the brush. Beginners take a cue from the masters, and some especially diligent even have every chance to surpass them. Ash of Gods: Redemption had a lot of inspirations, and almost all of them are obvious, but this in no way makes the game worse. On the contrary, she takes high-quality, beautiful, great works and tries to make them just as good, but with a different filling.

The most obvious borrowing is, of course, The Banner Saga, a Texas-based game that boldly uses Norse myths and legends in the name of a grim tale of the end of the world. From her, Ash of Gods took the plot in its most general form, the combat and role-playing systems, as well as the drawing style. It is important to understand that copying a style and copying a drawing are two different things, like riding lard and a Ferrari. You can redraw the “Gioconda” and pass for a plagiarist and an idiot, or you can pick up the style of Leonardo da Vinci and draw a neighbor to make his friends jealous. The artists of Ash of Gods: Redemption just drew conditional neighbors – and they did it no less diligently than the Stoic Studio team.

The second source of inspiration is not immediately revealed, but very actively manifests itself along the way. There is a suspicion that the screenwriter of the game, Sergei Malitsky, was extremely opposed to what was happening in George Martin’s A Song of Ice and Fire, and therefore came up with a universal plot based on it. Just imagine that you are reading some Game of Thrones and in the course of reading you get the opportunity to save Eddard Stark from the chopping block, and bring Gendry back to King’s Landing to seat him on the throne. Many fans would give their left kidney and right testicle to have such a book. So, Ash of Gods is a Game of Thrones with references so bold that it can be diagnosed with type 2 diabetes without looking. Its synopsis is in the most general form: the world is attacked by cruel and immortal reapers who forcibly subdue people and turn them into their army. But the rulers, instead of uniting and fighting back, begin the division of property and arrange a long-awaited territorial war. Against this background, several groups of heroes wander around the world, pursuing different goals, but they will definitely converge in the end. Who will reach the final, who will win, and who will die – everything is in the hands of the gods, that is, excuse me, the players.

The authors kept their promise: the plot of Ash of Gods: Redemption is mobile. As in the literary work mentioned above, there are so many characters that the death of one does not complete the plot, but only pushes it in a different direction. In the worst case, it may turn out that due to the death of the leader of the group, it breaks up, and minor characters either go missing or join already established teams. There are more than six dozen heroes who at least somehow manifest themselves in the plot. So much depends on the choice of the path to the end point, decisions in randomly pop-up events and how skillfully the players act in battle that no one shines two identical passages. One decision in the dialogue – and now new characters appear on the way of one of the groups, who play a certain role, albeit not immediately, albeit only for the finale. We made a different choice – enjoy the many times increased power of enemies. They made the third one, and now the adventurers ran out of strixes, which serve as a local analogue of supplies and allow the heroes to roam the global map. Dozens of minor decisions really affect the plot, and you can’t help but feel it.

The map itself is quite simple and understandable. Groups of characters can only move forward, but at intersections it becomes possible to choose exactly where this “forward” will go. Sometimes there is only one route, more often there are three, and sometimes there are five at once. The final point of each chapter is always the same, but a well-chosen direction allows you to get additional strixes, money, connections, change the loyalty of the team or meet merchants, and you can either rob them or buy useful charms or cards from them.

The cards that are spoken about here in almost every tenth dialogue are a help during battles. Outwardly, the battles are no different from The Banner Saga: there is a field divided into squares, along which characters of different classes taken to battle walk in turn. Each of the units has four main numerical characteristics: life, energy, base damage power and protection. Energy is spent on running further across the field, as well as delivering strikes that require additional strength. In battle, it also plays another role, almost tactical: the enemy can be hit not only by health, but also by energy, and if he loses all his strength, then further such blows will take twice as much life from him.

The cards mentioned above turned out to be useful features, but not always. You can take up to five of them into battle, but after use, the card burns out until the next battle. They can heal, you can break the armor of enemies, you can change the strips of life and energy, and so on. But not everyone is filled with bonuses. Most often, the card does something bad to both enemies and allies. And even purchased cards often simply gather dust in the deck, as reasonable players will not use them. It’s no joke, one of them in 99% of cases will simply kill one of your associates just to weaken the rivals a little. But to use the cards you need to spend a whole turn. And what is the benefit then?

In general, the authors have thought of many things, and even patches are not too lazy to release almost every two days, correcting the balance, removing some nonsense in logic, reducing the local “hunting” voice acting and adding the ability not only to knock out strixes, but also buy them from merchants. The project even has something that does not need to be edited at all – excellent music, which you can listen to here and forget about the game completely. However, there is something that needs to be corrected, but the authors will definitely not succeed. This is worth talking about separately.

Let’s say you’re writing a review for the conditional game Ash of Gods. Your task is to maintain a single style, keep the theme, not write about other games that are very far from the main one. But if you are writing a work of fiction where there are a lot of characters and a non-linear narrative, and the synopsis itself indicates the conflict of many different states, then your characters should be different, and not only externally. However, in this game, only three or four characters clearly stand out, and all the rest speak the same phrases with a characteristic manner of speech. For each of them to become a person, they needed either a head writer, a little more savvy in different styles of writing, or about ten assistants who could write dialogue in accordance with the character and nationality of each character.

But this is a private issue. There is another general problem. Due to the same type of communication with most heroes, the game can get bored very quickly, and the finale – a grandiose denouement, where horses, people and gods mix together – may seem insipid and insignificant. Scenario Ash of Gods is simply underdeveloped, the globality of what is happening is not felt, as if we really only read the Game of Thrones, and we never got to the Clash of Kings, and even more so Dreams of Spring.

Some events have taken place, some dots have been placed, and under the finale there is a gray ellipsis, confirming that what is happening was just a seed. Not so exorbitant that they are already throwing money at the authors for a sequel, but enough to go to play in the second round in the hope of changing the ending. Is it interesting to read local dialogues again, even if they are different? Hardly. But to look at events from a different angle is at least curious. The developers completed the task, albeit at a not very high level.