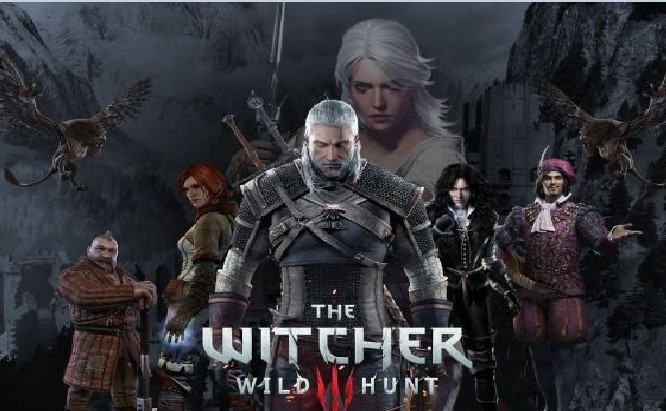 Introduction
Hello, friends. For almost the entire 2016, if I played something, then only in The Witcher 3: Wild Hunt . Let me share my impressions.

I got acquainted with the series by accident, having downloaded the pirated version of The Witcher 2: Assassins of Kings. I went through it on my ancient computer, which was with my parents and did not slow down except in Microsoft Office programs. Even the GTX 560 I bought in my student years did not save the situation. Nevertheless, I really enjoyed this game, which skillfully immerses me in its dark atmosphere. I sincerely did not understand what was happening and who all these characters were during a good third of the game, but I understood that they did not hold me by the hand, they did not perceive me as a child, but on the contrary, they talk to me on adult topics, albeit through a “medieval tale”. Of course, I completed it twice (Iorvet / Roche), rebooting almost before every quest to see all the possible consequences. At about this moment, I wanted to write a separate review for the second part, but, perhaps not worth it. It was almost the first adult game after the original Bioshock (1), which I was also lucky enough to play while already at university.

I did not master the first Witcher, since at the time of my acquaintance with him he was very outdated. I limited myself to reading the plot, and then after completing the second part.

I think it’s not even worth talking about how I was waiting for the release of the continuation of my favorite game when I saw the teaser. Of course, at that time I already knew that the game was developed as a continuation of the book and read the saga about the Witcher performed by Sapkowski with grief realizing that I definitely could not stretch it until the third game was released. And so I made a pre-order for 800 rubles and began to wait humbly, licking my lips at the videos of let players and reviewers, who were now and then invited to Poland to play the damp version, and sobbing every time the game was transferred. And finally, on May 19, he waited. It turned out I was not waiting in vain.

Plot
The Witcher 3 continues the events of the second part, carefully and not completely acquainting the players with the universe and the main characters during the “training in Kaer Morhen” and playing in the first storyline location. Then you will have a couple of hours of searching for your forgotten beloved, and then from 20 to 100 hours of searching for your “adopted daughter” (the time depends on how often you will be distracted from your duties, but it is impossible to refuse it). The rest of the events will unfold quite rapidly and within 5 hours you will see the credits mixed with a feeling of satisfaction from the journey. just the face through which the narration takes place. the volume of characters and non-linearity create a sense of the vividness of the story, which one wants to watch from all sides and distances. And in the case of the Witcher, from whatever side and how often I look, it comes out believable.

There are also disadvantages of course. This, in my opinion, is the absence of Saskia and Iorvet. But worst of all is the absolutely inadequate denouement with Diykstroy, [mini-spoiler] who, in one of the quests, attacks Geralt and his friends despite a broken leg, despite the fact that he knows perfectly well what the witcher is capable of, who broke this very leg from the book …

Gameplay
The gameplay has undergone big changes from the second part: both for the good and for the bad.

On the one hand, a beautiful open world has appeared, on the other – it feels more empty. The predecessor of the third part seemed more filled due to the corridor. And nevertheless, the uniqueness of each quest does not allow the world of the third witcher to become as boring as Dragon Age: Inquisition. The reworked combat system is overwhelmingly better. The only gripe on my part is the new Axii animation, which I personally found cooler in the second part. Now Geralt does not even try to hide it, but these are all trifles.

On the one hand, the preparation of potions became better, on the other hand, I really missed the “preparation menu” in the meditation mode, as well as traps for the first time. The crossbow became a good addition (I personally took it off, since the game does not force you to use it). The monsters are all the same difficult and interesting to destroy and delight with their diversity.

It seemed to some that the game too often forces you to use “flair”, but I do not share dissatisfaction about this, since the Witcher is a profession and it is flair that is the reason why Geralt succeeded in this profession. The game has a lot of new, a lot of old. Some mechanics were too narrowly used (for example, Keira’s magic lamp). But in general, the new works, and the old can be added using mods.

Graphic arts
Outwardly, The Witcher 3 is much more beautiful than its predecessors, and I’m not just talking about the Witcher series itself. However, with the arrival of beauty, a portion of the inherent gloominess was also lost. Here I would also like to note the elaboration of animations, which I consider the best in the RPG genre at the moment. Moving around the open world is pleasant, since nothing distracts from the gameplay – neither the “clumsy” animations, nor the fake scenery – since neither one nor the other is in the game (except for the behavior of Roach when descending the slopes).

Personally, I missed the stylish witch jackets from the second part, but it’s not scary (since there are mods).

Audio
The audio accompaniment has forever settled in my playlists, and Priscilla’s song has become my favorite song in Russian. The main themes of The Witcher, which are played in the forest, fascinate with solemn sadness, and ethnic combat motives set up an epic battle both for the first time and for the one hundred and first time.

Fashion
As soon as mods began to be released for the game, I began to complicate the game. As a result, it became more complicated until I replayed the very first encounter with necrophages 4 times. But it was worth it! First of all, I made opponents more aggressive, faster and smarter. Secondly, I turned off almost all the interface indicators. Thirdly, he returned Geralt to his freakish face from the second game. The developers made the White Wolf in the third part a Hollywood handsome man and it became difficult for me personally to associate him with the exploits of the previous part. The Nexus website still has a lot of mods for every taste that will prolong the life, or even breathe new into your game.

First of all, I recommend putting the modification on the camera, and setting it over the shoulder of your character, at least out of combat. This will make exploring the world several times more enjoyable and atmospheric.

Outcome
Why am I starting all this. After all, it is obvious that a lot of time has passed, I simply cannot physically say anything new about the game, since everything has already been said. The fact is that since I purchased The Witcher 3, the number of games I purchase has been close to zero. I can no longer give 2 thousand rubles for cuts from EA and Ubisoft. For about this amount, The Witcher 3 and its excellent modding community (thanks to the developer tools shared by CDPR) entertained me for a year and a half (almost 300 hours played).

After a huge thread on the official forum, where I, together with other players, wrote that the affair with Triss was thought out and not half as detailed as with Ian. After a few months and thousands of posts (this was the largest thread on the forum), CDPR officially announced that they had reviewed the content and agreed with the players. After 3 months, a patch was released, which made Triss an equal in “romantic” character. It was the non-disdainful attitude on the part of the developers, adequate to the community of players, the genius of the modders and, of course, hundreds of hours of exciting content that made me a fan of CDPR studio. Only for this I am ready to continue to buy their games and I encourage others to do so. We vote for content with our wallets. While we buy garbage for 2 thousand, they will sell it to us, – I finished and thought about Watch Dogs 2 and Star Wars: Battlefront (2015),

Unfortunately, The Witcher 3: Wild Hunt has n’t revolutionized the pricing of video game producers. Games with the size of DLC for 2 thousand rubles continue to appear on the shelves. But I believe that over time, and maybe with the release of new masterpieces from CDPR, this will change and with the price, not only the cost, but also the quality will increase.