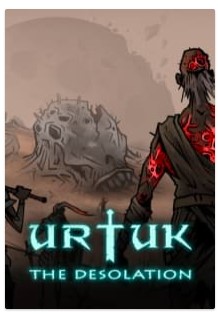 Urtuk: The Desolation will take the player into a dark world of suffering and labor. There are no elves, gnomes, dragons or other banal mythical creatures here. There is light magic as well as weak sorcerers. Many years ago, Giants roamed the earth, living peacefully with people. But the war between the two races ended with the death of the Giants. Now scientists have discovered the ability to extract the essence of the life of ancient giants from their remains.

Travel the open world and take part in turn-based tactical battles. The gameplay has role-playing elements, thanks to which you can complete secondary tasks, communicate with NPCs, upgrade your wards and much more.

You will take control of adventurers as they navigate the ruins of the ancient world. Hire new heroes, get items from killed enemies and do everything to survive in a harsh environment. Everything around it is rendered in a dark fantasy style, and battles take place on expansive maps with elaborate environments to interact with.

Explore the carefully executed class system and skill tree. Each character has its own skills and characteristics. By completing tasks and defeating opponents, you will increase the level of protagonists. Pump over new skills that give more opportunities. Throw your opponents onto spikes or high cliffs. Counterattack enemies or defend allies. Perform combo attacks, use archers, swordsmen and other warriors in battles.