Insomniac Games has positioned the new Spider-Man game as a stand-alone work. Say, we have here not just DLC, but a full-fledged game – just a little smaller. Almost likeUncharted: The Lost Legacy . Buy, fly, do not skimp. But is it worth believing these promises? Alas and ah, but the end result suggests otherwise. How did it happen? I’ll tell you now.

Diligent apprentices
It’s funny, but after passing Marvel’s Spider-Man: Miles Morales wants to talk not about the add-on itself, but about how short the memory of journalists and gamers is. Two years ago, when Insomniac Games released the original game about the adventures of Spider-Man on PlayStation 4, whoever sang its praises. Say, we got a masterpiece in five minutes – and the gameplay is almost perfect, and the graphics, and in general this is the best interactive superhero immediately after the Batman: Arkham cycle.

The truth was that the authors Marvel’s Spider-Man turned out to be only diligent apprentices who repeated the concept invented back in the early 2000s by Treyarch. Released in 2004 on PlayStation 2, Xbox Original and GameCubeSpider-Man 2 , and it was this game that, in fact, determined for years to come what the adventures of a friendly neighbor on the other side of the TV screen would look like. An open world, a clear storyline, sometimes a little crazy side quests, time trials, a Spider that clings to a web not to the air, but honestly sculpts it to skyscrapers – all this appeared just then.

The 2018 game was exceptional, diligent, but a copy. Yes, with much more perfect graphics, a huge number of tasks, an incredible level of production, but only a repetition of what has already been passed. In fact, from the proud title of a clone of Spider-Man from Insomniac Games, only the almost complete absence of sane games about people in colorful tights on the market saved. Of course, three years before the release of the Insomniac project came out a masterpieceBatman: Arkham Knight , but, firstly, the Spidey was never able to reach the Dark Knight in terms of quality and originality, and secondly, there was no one on the market except Bats. Not really consider the LEGO line a serious competitor? 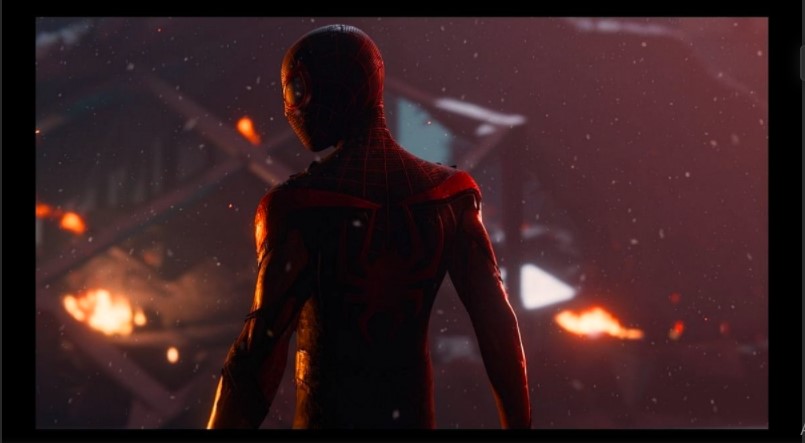 And so, on the eve of the start of sales of the PlayStation 5, the developers threw Spider-Man: Miles Morales – a standalone addon for the original game on the shelves. And you know what? History repeated itself. Only this time, the add-on is diligently copying the original story. Ouroboros still ate its tail and spawned a clone of a clone.

Here to anyone on anyone to sneeze
The story starts without swinging. Giant Reno flees custody. Miles Morales, accompanied by Peter Parker, pursues the big man, then fights with him and sends him to prison. Then it turns out that the “real” Spider-Man dumps Mary Jane on vacation together, and in the meantime a new gang is announced in the city, calling itself The Underground. And now Miles is jumping on the web, trying to prevent a catastrophe, hitting the faces of opponents and dodging shells flying in his direction.

Actually, if you expect something unusual from the plot of Miles Morales, then you can safely pass by. Local history – from the very beginning to the end – looks like a stamp, even against the backdrop of films from the Marvel multiverse. The heroes speak in cliché phrases, the conflict does not cause any surprise, all the cards are revealed ahead of time, the main bad guy can be seen already in the first intro – in short, the good script is clearly not here. 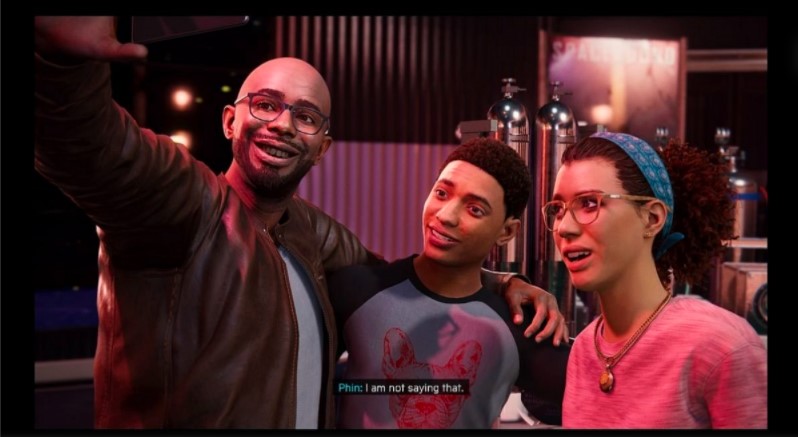 Gameplay is another matter. As I already said, the previous game could not boast of something original either. Another thing is that it took about twenty hours to complete Spider-Man of the 2018 model – and this is without taking into account all kinds of side quests and tests. The storyline of MIles Morales flies in just four or six hours and consists of eighteen tasks, which are interspersed with urban activities – like pacifying a hooligan from a gateway.

Unfortunately, the compressed timing was far from the best reflected on the game. In the full-fledged Spider-Man, the developers quite skillfully alternated fights with other mechanics. We were allowed to wave fists, solve puzzles, and loosen up the bosses, and even turned everything upside down, forcing us to fit into Mary Jane’s suit. In many respects, this is why the game did not tire as much as a modern “sandbox” with pumping can tire (yes, “Assassins”, I mean you). 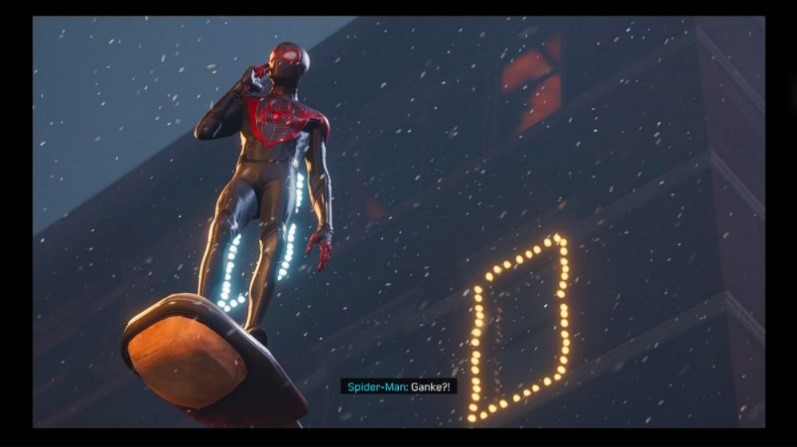 Miles Morales, at first glance, tries to make the most of this concept. However, she fails. Take riddles, for example. They are concentrated at the beginning of the passage and closer to the end. In the interval there is a continuous scratching of his fists on the foreheads of opponents. There is only one normal boss, and even that in the Spider-Man universe has been such a fool, a total loser from time immemorial. Of course, I’m talking about the same Reno, who will have to fight two times. Do you think the tactics will be somehow different from all the battles with Rhino we’ve seen before? Unfortunately no. We dodge the blows, we saddle the big man and make us imprint our forehead into the desired object – that’s all love.

The rest of the bosses are not impressive at all. Unfortunately, even the final battle was a failure. It looks insanely spectacular, but in fact, all the player needs to do is to press the “circle” in time and learn how to properly throw the enemy into the air. If these two points are met, then there will be no problems with the villain. 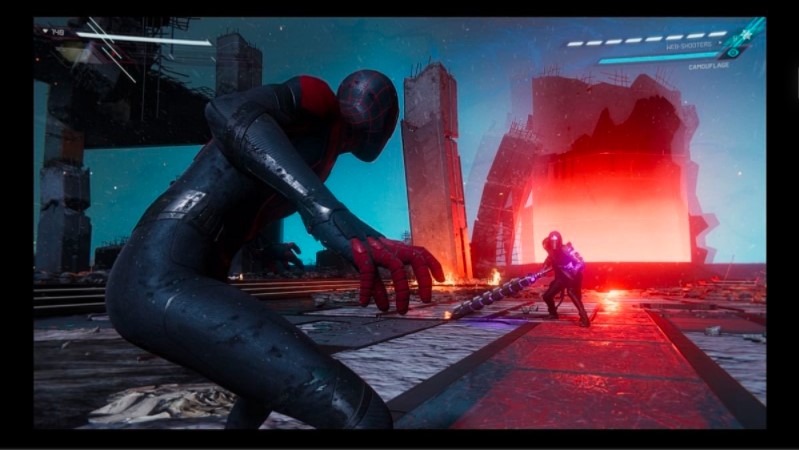 The rest of the time you have to deal exclusively with massacre. Even in those tasks that do not seem to provide for anything like this (well, who would have thought that the search for a cute cat would turn into a fight with gopniks?). Miles is literally bombarded with opponents. And it’s actually not that bad … it would have been if the developers had written a slightly more extensive storyline. However, within the framework of the timing that is, the action is simply tiresome. Even the electrical abilities of the hero do not save – they simply replace the vast arsenal of gadgets that Peter used. No more. But thanks for invisibility – brings back memories of the never-completed Spider-Man Unlimited. Is that, the beasts as opponents are not enough, yes Bile with Bloody. 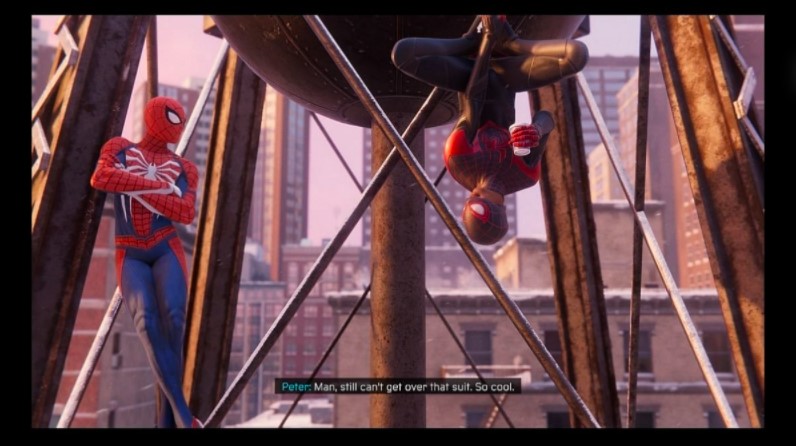 The problem is that the new game about a friendly neighbor simply cannot be perceived as an independent work – it feels like DLC, plays like DLC, and even has sores that are typical for DLC. Sometimes it comes to ridiculous. Rescuing a cat as a story mission is okay. But what about finding sounds for your uncle? Doing it even once is too much. A frank delay in the passage, which has a place in side-quests, but not in the main storyline!

Jaded record
Of course, the game is not limited to just passing the storyline. After the finale, Miles can move around Harlem and complete the remaining missions. Only this part of the game … is even more reminiscent of the original Spider-Man two years ago. Again we have to beat muzzles at construction sites, look for all sorts of things, go through training tests. Even the side quests failed this time. Remember, for example, how “cool” it was to look for the Black Cat Easter eggs? How do you like the idea of solving the problem with water supply in New York or helping to save the restaurant business? 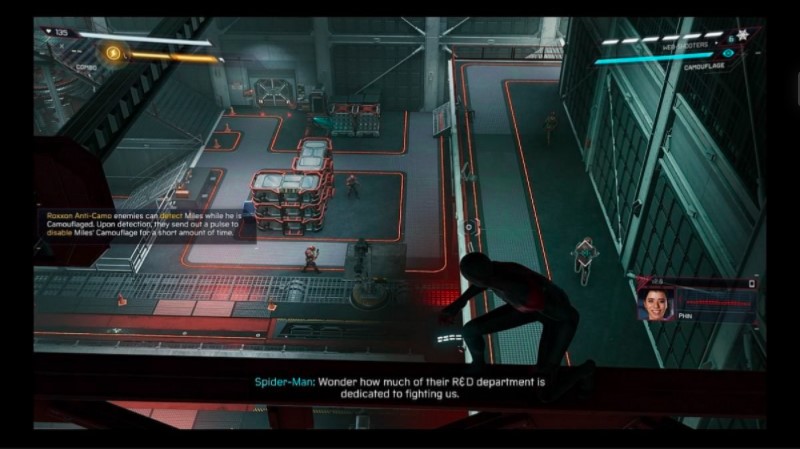 Do not misunderstand me. The spider supplement itself is not bad. It is well delivered, it is really interesting to pass it. But this is not a “PlayStation 5 starter game” level, this is not a story that can sell consoles – this is just DLC. The main problem with Miles Morales is that the game was presented as an independent product that can exist in isolation from the main game.

That is, the developers de facto stated that the adventures of Morales can compare with Uncharted: The Lost Legacy and as many as two add-ons for The Witcher 3: Wild Hunt . However, in this league, Spider looks weak – he is like a black sheep, by pure coincidence, wedged into the flock. And with this, alas, nothing can be done about it.

So it turns out that as part of one big game called Spider-Man, Insomniac Games’ new work is pretty darn good. But as a standalone product … If you want to buy it as your first exclusive for PS5, then think hard if it’s worth it. Miles Morales justifies itself solely as DLC for the main story. For a full-fledged game, this six-hour adventure does not pull at all for a whole bunch of completely objective reasons.