How to open all weapons in Teardown

Here’s how to get all weapons and tools in Teardown .

Teardown is a logic game with a destructible voxel world in which players have to solve interesting puzzles to collect items. It is possible to break buildings and other structures in the game both with the help of vehicles and with a whole set of tools.

There is only one way to open new weapons and tools – by completing story quests. After completing the next mission, you will receive one or more new tools that will be stored in your hangar until they are collected. You can also upgrade some weapons to increase their ammo capacity and effectiveness. This can be done with money and a computer terminal in the hangar. 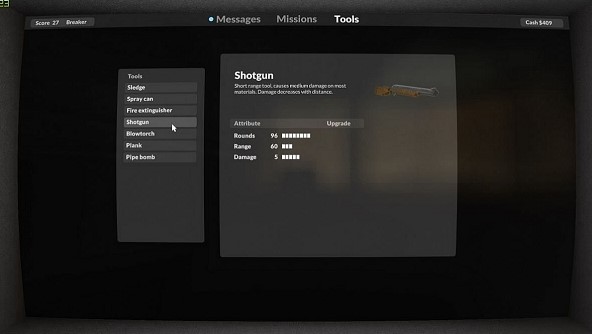 How to open all weapons in Teardown

Money, in turn, can be obtained in the only way – to find and collect valuable items in each mission. Such items are scattered across all locations, and some of them, the most expensive ones, are hidden in secluded places.

Teardown is an experimental pixel-style action movie with massive 3D decorations and a unique physics engine that offers you to destroy every object that gets in your way. Mansions and yachts, warehouses and military bases – even basic inventory is enough to turn the world around into broken cubes …

Plot and gameplay
The story is divided into episodes related to general themes and goals. The lion’s share of the playing time is to fight. And there is also a sandbox mode, when you can move around the global map, interact with the environment and destroy everything that gets in the way for no reason. No restrictions and rules, just creativity, shrouded in curiosity and attempts to turn the environment into disparate blocks.

Is co-op available in Watch Dogs: Legion
How to get a Raider Cat on your Drakkar in Assassin’s Creed Valhalla
To Top